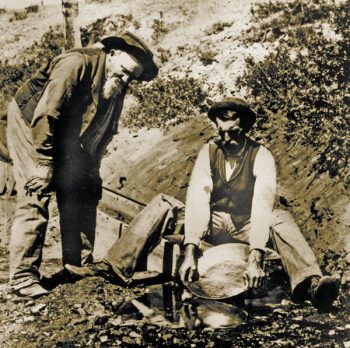 The first recorded gold discovery in Montana happened in 1852, but the actual Montana Gold Rush did not start until 10 years later when gold placers were found at Bannack. More gold deposit discoveries followed afterwards for examples at Virginia City in 1863, Helena and Butte at 1864, and Atlantic Cable Quartz Lode in 1867. Butte district was actually a copper mine, but it also produced 2.9 million ounces (or more than 90 tons) of gold in the 1990’s, most as byproduct of copper production.

The Montana Gold Rush, although not as intensive as in the old days, is still happening now. There are still several active mines including Confederate Gulch and Browns Gulch placers. Three other mines including Stillwater, Lodestar, and East Boulder Project are for titanium productions but they have produced gold as well.

Since the first discovery more than 160 years ago, Montana has produced thousands of ounces of gold. Of course, it is not as plentiful as in several other states, but it might also mean that more deposits are still left to be found. Another good thing is that potential locations are owned by the American people and open for mineral explorations. Some people are still trying to find some left over gold nuggets in old mines and creeks with historical gold productions. In modern days, you can still feel the excitement of the Montana Gold Rush in the following locations:

Considering Montana is a big state and the fact that it has historical gold discoveries, modern day gold prospecting still happens all around. The metal detector is an ideal tool for the job, because gold panning and dredging are too difficult to yield anything unless you are in a very good location. While a large portion of Montana is public land and open for mineral exploration, chances are you will not find very good spots that have a lot of gold. Many of the potentially easiest and richest locations have been claimed already. However, gold prospecting these days are more than just about trying to find the precious metals, most people actually do this to experience the outdoors. If you want to find gold, be sure to ask permission and respect the rights of the gold claim owners and you’ll be just fine.