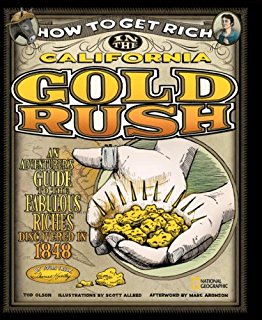 California Gold Rush Yesterday And Today: When it comes to the Gold Rush, there is no better place in the world that can be associated with the term than California. While many other areas in the country had their own gold rush history, the California Gold Rush was the one everybody knows and talks about. The discovery of gold at Coloma on the American River by James W. Marshall in the 1848 drove about 300,000 people from the eastern half of the United States and abroad. All looking to strike it rich.

Gold has earned California an international reputation as the golden state. Generations after generations of people were flocking to the state, trying to pursue happiness, wealth, and fame. But not every one actually wanted to find gold; these people were all from different backgrounds and worked in different fields such as oil drillers, farmers, movie makers, builders, and more. While the California Gold Rush literally meant the rush for gold, it could be interpreted as the earliest period of economic boom time in the state. It was also associated with a new beginning, hope for better future, and seemingly endless opportunities to find fortunes.

Mining continued for many decades since the discovery of gold by James W. Marshall; even until today, there is still gold

mining activity in the state, both commercial and recreational. However, everything is now on much smaller scale. For the vast majority of people, including locals and tourists, gold mining is simply an outdoor activity for fun. There is still a chance to get a big chunk of gold indeed, but the primary purpose of modern gold panning is to get outdoors, learn about history, or try the same experience as the first prospectors did.