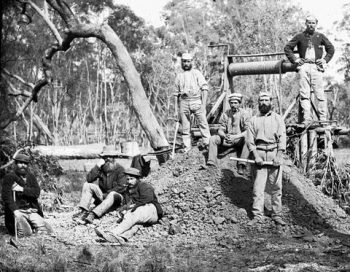 A brief period of Wyoming gold rush history started in 1842 and ended in 1875. One of the first discoveries occurred in 1842 at the South Pass-Atlantic City district (located in present-day Fremont County). Even after the first discovery, placers only worked intermittently until 1867. Other districts in the area include Twin Creek, Oregon Buttes, and Lewiston. Production records were quite poor.

The Wyoming gold rush and prospecting activity kept on going, nevertheless, and richer gold deposits were found in Granite Mountain Range in the central part of the state, Tin Cup, Rattlesnake Hills, and Seminoe districts. Again, each area only yielded small amounts of gold. It makes sense because Wyoming had limited exploration, but at least show that the area had enough to please prospectors.

For modern day gold prospecting, you may find gold in the Absaroka Mountains. Located in the northwestern part of the state, placer gold deposits in many different locations are recoverable by traditional panning and dredging. Popular spots include Sunlight, New World, Stinking Water, and Kirwin. Those areas have seen limited commercial explorations, so recreational prospectors have a good chance of finding gold there.

During the Wyoming Gold Rush, initially, the towns of Atlantic City, South Pass City, and Miner’s Delight provided enough gold for prospectors and miners. By 1875, the district was nearly deserted by the time gold production reached about 300,000 troy ounces (more than 9,000 kg). In 1962, the same district was mainly used for iron mining.

In general, Wyoming gets little attention when it comes to gold mining compared to its neighboring states. Population density is quite low in Wyoming, so it only makes sense that many of its’ areas have been poorly explored. Despite the historical gold discovery, Wyoming is most commonly associated with cattle ranching and natural gas or oil. Another reason is that the climate in the state is not conducive for gold mining; the winter is harsh and too long for steady mining activity.

The lack of commercial exploration opens the door for recreational gold prospectors to find good gold in the state. Keep in mind that Wyoming is a remote state, so be prepared to face a little bit of difficulties in transportation or communication. Buy a gold claim map. Know where you are at. Gold prospecting today is just about as tough as outdoor adventures get. As long as you are well-prepared and carry all the necessary safety gear, you should be able to handle all circumstances with minimal effort. There is enough public land in Wyoming to cover everybody’s desire for gold.