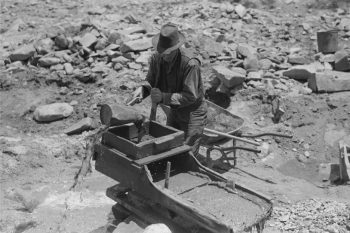 Compared to its neighboring state of Arizona, New Mexico has nowhere near the record of gold production. However, New Mexico gold mines have produced a good amount of gold in the past few centuries from both placer and lode deposits. During the earliest days of the New Mexico Gold Rush, the Apache tribes made it a little bit difficult for people to do their gold prospecting activities. Early Mexican settlers and Spanish explorers did find gold, but they had to overcome some challenges from the native inhabitants.

As soon as the whites settled the state in 1848, the real New Mexico Gold Rush happened. Plenty of gold has been found in placer, but the majority has come as byproduct of mining activities for other minerals. One of the first discoveries occurred in 1828 in Old Placers district. It was soon followed by the discovery of lode deposit. In 1877, gold was found at Rattlesnake and Wicks gulches; prior to 1904, total production reached $6,750,000 worth of gold.

In 2007, all gold productions from New Mexico combined made only 13,000 troy ounces (400 kg). This relatively small amount was a byproduct of copper mining in Grant County. One of the biggest challenges in New Mexico for gold prospecting is the lack of water; the state has a dry climate. Dry washers and metal detectors are the best tools to use for modern day prospectors, but don’t get your hopes too high yet. While it’s best to have a New Mexico gold map, some of the best places are the same old districts where gold was found in the past. You may want to try your luck at the following districts:

The New Mexico Gold Rush was not a major deal for the prospectors in the old days. It can mean two things: whether the state does not have gold or it hides plenty of it somewhere yet to be found. There is no way to tell unless you do your own exploration by covering more grounds. Gold panning can be fun as long as you don’t make it the only source of income; consider the activity a recreational one and you won’t be deeply disappointed at the end of the day. Please also understand that much of the lands in New Mexico are private property, Indian Reservations, and military reserves. Some areas are off limits or it takes specific permissions to access.