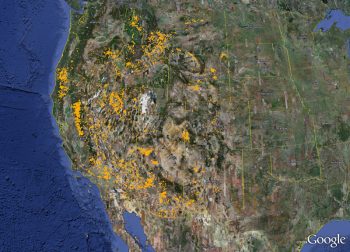 Sparkling gold in the bottom of a pan is one of the most rewarding experiences that any gold prospector can ask for–and the bigger the flakes and clinkers, the happier the prospector. While some say that hunting for gold is the most fun, the hunt will never be as much fun as actually finding gold. Hopefully the below listed gold prospecting locations will make the hunt worth it. But first, a few pro tips about gold prospecting to save time and money–because spending $1000 to find $100 worth of gold is not a strategy.

Finding gold with just a gold pan makes it tougher on the prospector, but it is possible. So if a pan and shovel are your only tools, common sense says you’ll need to prospect the most promising areas to make your effort work. That said, there is an old adage among prospectors: The best place to find gold is where gold is already being found. A gold claim map is a good way to see where gold is being found, and this small investment can be covered by a single flake or clinker–not to mention make your time and effort worthwhile. And a word to the wise; paper gold maps only show where gold deposits are located–they do not show any of the claims that might cover those deposits. Only a good gold claim map will give you that information. So don’t waste gas money following a paper gold map only to discover you are not allowed to prospect there because the land is all claimed up.

While much of the easy gold has been found, there is said to be roughly 85% of the precious metal still in the ground. Every year new gold is washed down the hills and into the streams waiting to found. Many large lode miners left millions in gold-rich ore behind because it just wasn’t profitable at the level they mine. But these abandoned deposits can be very profitable for the small scale miner looking for a few ounces per week. Other viable gold claims were abandoned because the price dropped, or the country was at war leaving little time to focus on gold mining. Considering the price of gold today and the tools and technology the modern prospector has access to, gold prospecting can still be very rewarding.

Most people are not comfortable going deep inside a lode mine to collect and process ore. While the rewards can be high, the risks are high as well. The chance of the mine collapsing can often-times be minimal. It’s the gases and mold that can create the greatest danger. That said, placer mining in rivers and streams can be the most rewarding with little to no risk involved. Some of the best locations of placer deposits are as follows:

Pro tip for placer miners: The river or creek you are panning was higher 1000 years ago. Look at the surrounding banks and see if you can spot ancient collection points. Dig some of that dirt and drag it down to the water for panning. You might discover that 30 yards up the hill from the creek is a respectable pay streak. Believe it or not, most people don’t know this. If you have a metal detector, sweeping higher up the hill can make this effort easier still. If you find a nugget you probably found some flakes as well.

At the end of the day, there are thousands of placer gold prospecting locations on public lands holding billions of dollars in gold just waiting to be harvested. A good gold claim map, a shovel, a gold pan, and a smart plan are all you need to get started. Take the gold you found and trade it for a sluice box at the mining supply store. Then take the gold you find with the sluice box and trade it for a high-banker. It’s not exaggerating at all to say you could have the very best prospecting equipment in a single season after starting with only the most basic tools.