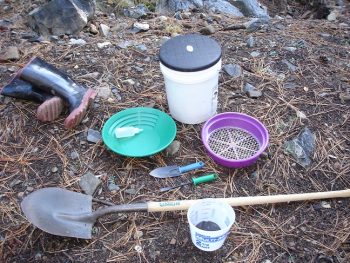 For recreational gold prospectors the fun and excitement in prospecting is not merely the hunt to find gold, but also the outdoor adventure and interaction with nature. Gold prospecting actually teaches some valuable life lessons: like the hard work miners put in to find gold, their hopes of discovering fortunes, and how they survived for many years during the gold rush. And most of those miners did not use modern gold prospecting equipment such as metal detectors, motorized sluice boxes, or modern suction dredges.

If you are interested in prospecting today you don’t have to purchase state-of-the-art dredging or sluicing equipment to find gold. A few pieces of basic equipment should cover your needs in most cases, and you can trade your gold for better equipment at the gold supply store. Here are some of the most basic and relatively inexpensive pieces of prospecting equipment to get you started.

The Gold Pan: Although the gold pan is considered the most basic piece of equipment, it is also one of the most effective. Beginners and seasoned prospectors alike will find various situations where the gold pan is more useful than any other tool. Various designs are available, and a common feature across many models are the riffles used to trap gold during agitation, and to easily remove the gold when the agitation process is done. Some gold pans are made of heavy-duty metals, while the most popular and desirable are high-impact plastic.

The Sluice Box: Using only a gold pan to harvest gold takes a very long time. To speed up the process without going into debt, a small non-motorized sluice box is used 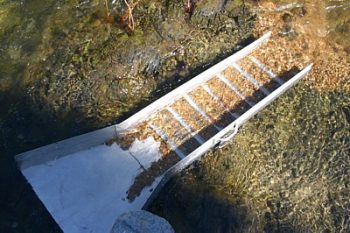 . Instead of working one pan at a time the prospector slowly shovels the dirt into the mouth of the sluice box letting the natural flow of water wash the lighter materials away while also catching heavier materials like gold in the riffles. After a few hours of this process the miner takes the concentrates (sediment) from the bottom of the sluice box and pans that down to just the gold, hopefully.

The Shovel: While a shovel seems like an obvious piece of gold prospecting equipment, they actually come in various sizes for different situations. Some of the better prospecting shovels are thinner and longer with serrated edges to cut through hard packed soils and river stone. A small spade with serrated edges is also a must have item as you will find your full size shovel just doesn’t work in smaller crevices where gold might accumulate.

The Pick: The pick is another obvious tool that saves lots of time. Gold is often found mixed in with old river stone and soil. When dry that soil can be like concrete, and that’s when a good pick comes in handy. And like the shovel, picks come in different sizes and you will probably use both during the course of a days worth of digging.

The Classifier: The classifier is a round screen that fits perfectly on top of the gold pan. The objective is to shovel your material into the classifier as it sits on top of the pan then place both in water for the initial agitation. Doing so separates the heavier rock from the soil which falls through the screen into the pan–where flakes of gold may be found. But be careful while throwing those rocks back into the stream–one of them could be a gold nugget. The classifier is another piece of gold prospecting equipment that is cheap and really speeds up the processing, and in gold prospecting, it’s all about processing dirt–lots and lots of dirt.

The Gold Map: A good gold map can save the prospector $100’s in gas alone. Not to mention time and effort spent processing dirt where little to no gold has been found. We sell a digital gold claim map viewed as an overlay in Google Earth which can be taken to the field with you on your smartphone, tablet or laptop. It’s not enough to have a paper gold map that shows only areas where gold was found–you need to know in advance if that area is all claimed up. It’s a waste of time and money to get to an area only to learn you can’t prospect there. And with a gold claim map like ours we can put you on an abandoned claim that might sit right between two money maker claims, and you are legal.

For the recreational gold prospector it is important to understand that you don’t have to spend ridiculous amounts of money just to get involved in the activity. While some basic equipment can run into $100’s of dollars, most gold panning supply stores have used equipment for a fraction of the cost of new. And for whatever it’s worth, after a day of prospecting your shiny new sluice box or special shovel will look just like the used one you saw at the store. Metal is metal, and gold prospecting equipment will usually outlive the owner. Something else to consider, a lot of open placer sites don’t allow anything motorized on the property, or they might require a special costly permit.

Gold Prospecting Knowledge: Without any doubt the most valuable tool the prospector has is his/her knowledge of where gold might be found, and how to best get that gold out of the ground. And considering finding gold is all about processing dirt, a little knowledge of gold can put you on the right dirt to process. Things to consider are:

A good prospectors knows the stream they are at once flowed much higher up than today. Look up the hillside to see if there is a big rock that might have once captured gold when the stream was higher. Gold will collect on the down-stream side of big rocks so the greatest amount of gold might be a few yards up the hill on the down-stream side of that rock. Fill a bucket with some of that dirt and drag it down to the stream and pan it.

The BLM and U.S. Geological Survey provides basic information about gold prospecting locations and mining history. There are also a lot of “how to” videos on gold panning basics on YouTube. You don’t need to buy a video to learn basic prospecting and panning techniques. The old timers didn’t get it all so if you’re down stream from an important old mine, you’ll probably find placer gold in the stream. And keep in mind that tons of new gold gets washed into streams each year as rain and swollen rivers replace previously harvested areas thought to be “picked clean.”