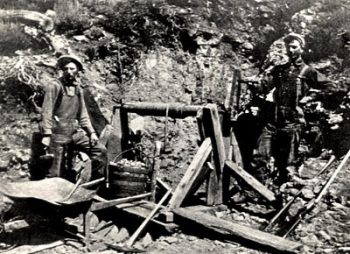 There is something unique about Utah. It is one of the leading states in terms of gold-production, but people do not seem to be very interested in the state for gold prospecting. The obvious reason is that much of the gold found in Utah was a byproduct of mining activities for other minerals including silver, copper, zinc, and lead. Today, the most lucrative gold producer is Bingham Canyon, which is a copper mine located just southwest of Salt Lake City. So far it has produced more than 23 million ounces (about 715 tons) of gold, making it one of the largest gold producers in the United States. For a mine designed to search for silver, this record is surprising.

There are not a lot of Utah gold mines. The last major one was the Barneys Canyon which stopped mining in 2001. It is officially inactive, but the area is still able to recover considerable amounts of gold from the heap leaching pads. In 2006, total gold production from Utah reached 460,000 troy ounces (about 14 tons).

Most of Utah gold mines only yielded in minimal recoveries. The problem was that much of the gold was in extremely fine size and small quantities. As a result, early miners were not very encouraged to continue their exploration. The attention shifted towards other minerals, but then again there was another problem; the associated cost with recovering copper, silver, zinc, lead, and other minerals was too much for average prospectors. For modern day recreational prospectors, however, this should not be a problem. Rivers and creeks still provide a good enough challenge for them to enjoy the experience. Careful gold-panning is a must, or the gold will just be lost in the recovery process.

Some potential Utah gold mines include:

The best thing is that you don’t really need any permit to do recreational gold prospecting in the state, as long as you use non-motorized methods. Wide areas of public land is available for anybody to try their luck in finding the yellow metal.