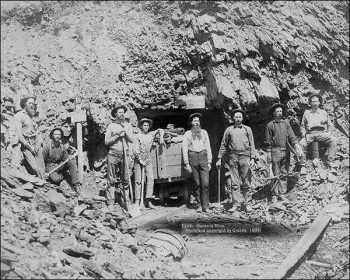 Montana and Idaho stand side by side. Most gold in Montana has been found in the western part of the state near the border of Idaho. This part is filled with difficult terrain of rugged mountains along the Continental Divide; almost all the remaining parts of the state are flat land areas. The geological conditions are probably not ideal, but no one ever said finding gold is easy.

Montana had its first gold discovery in 1852, or about a decade earlier than in Idaho. However, the whole idea of the Montana gold rush started in 1862 in Grasshopper Creek. Among all Montana gold mines, the Bannack (present-day Dillon, Montana) was probably the first to establish its existence in the state; it was quickly built and soon inhabited by thousands of miners in search of the yellow precious metal. It did not take long until the next potential gold mine was found. In 1863, Alder Gulch made its way into the map thanks to a discovery of a considerable sized deposit. More Montana gold mines surfaced as a result of the rush including Helena and Butte in 1864 and Atlantic Cable Quartz Lode in 1867. Butte district was primarily mined for its silver, yet it has produced almost 3 million ounces of gold through the 1990s. For a byproduct, that was actually a lucrative record.

Today’s active Montana gold mines include the Golden Sunlight and Montana Tunnels. Some gold placers are also still in production such as the Confederate Gulch and Browns Gulch. Even several titanium mines produce gold as well for example East Boulder Project, Stillwater, and Lodestar.

Montana is not a small state by any means. Records of gold discoveries and production have been good, so modern day prospectors still have a good chance to find fortunes here. All sorts of mining methods can work too including panning, dredging, sluicing, and using a metal detector. As discussed earlier, most of the gold is in the western part of the state; there are few exceptions, but you will have better chances of finding the gold if you look around that area.

Despite the long-running exploration for more than 150 years, Montana remains a good state for gold prospecting. Your search should start at historical creeks and the remnants of old mines. Large gold nuggets have been found in the state, so a metal detector should not be left behind in your exploration. You can find an excellent Montana gold map on this website. The biggest problem is that many (if not most) of the productive areas are already claimed, but there are still wide enough public lands for everyone to search for gold in the state.