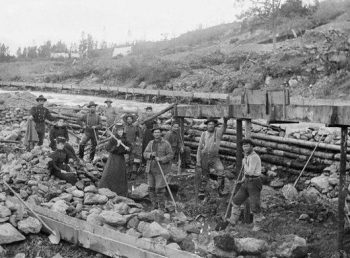 Among all states in the country, Idaho is one of the most productive in terms of gold mining. Another good thing is that about 75% of the land all across the state is public land and managed by the Bureau of Land Management and Forest Service, allowing everyone to prospect for gold without worrying about trespassing into privately-owned properties. It does not sound like much, but acquiring the permit to prospect gold without legal issues can be indeed quite a hassle.

Dozens of Idaho gold mines have been found, but most of them are in difficult-to-access areas. This means an average prospector must also be prepared to do a little bit more leg-work to find good spots for the venture. Gold was first discovered in Idaho in 1860. It was in Pierce at the juncture where Orofino Creek meets the Canal Creek.

In Central Idaho, almost all creeks and rivers probably have gold. If you combine that with potentially gold-rich land areas, it is safe to say that this yellow precious metal is spread throughout the state quite evenly. Apart from the aforementioned, other popular Idaho gold mines are Warren, Murray, Elk City, and Yankee Fork.

For recreational gold prospecting, Idaho is not known for its friendly terrains. In fact, it is the most remote in the lower 48 states. Gold prospecting will involve backpacking and a fairly adventurous journey to reach an ideal spot. Supplies such as water, food, safety gear, gold maps and tents are crucial since you may have to travel for days without seeing any sign of civilization.