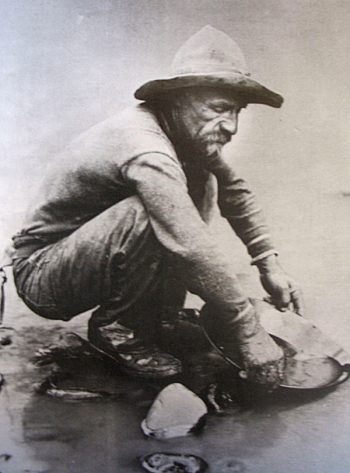 Everyone knows about the California Gold Rush, and it was indeed the most important period of gold discovery in the United States by far. Ever since the first record of gold found by James Marshal on the property owned by John Sutter (present-day Coloma), thousands of people have come to the state and searched for fortunes lying deep in the grounds, creeks, mountains, and rivers. The San Francisco economic and population boom times were also greatly affected by the gold rush. Until today, California gold mines still yield considerable amount of gold nuggets.

A large number of mines existed during the gold rush. In 1852, production reached its peak with 3.9 million troy ounces (121 tons) of gold. Extensive mining activity during the early days of gold rush exhausted the state and soon enough the inevitable happened: production crashed. In 1929, the state could only yield about 412,000 troy ounces of gold. It took about 10 years for production to increase; between the period of 1939 and 1941, California soared back with about 44 tons of gold production each year.

Three of the most popular California gold mine districts are as follows:

The northern part of the state seemed to take all the glory when it comes to gold discovery. Its southern counterpart, however, also produces gold albeit underrated. Prior to the famous gold discoveries in the northern part, Spanish and Mexican miners were in the south doing the same thing. Whether or not the state has more gold to offer is questionable due to the strict mining regulations. In 2007, California only produced 9,400 troy ounces of gold from two mines.

Limitations in gold prospecting and explorations have put a halt in the establishments of new California gold mines today. Gold mining companies including small and large scale have been affected by the regulations, but many small prospectors are still active. A good number of mines are still in existence; San Bernardino County, the largest county in the U.S. by area, has several popular districts including Dale, Holcomb, Stedman, and Silver Mountain.