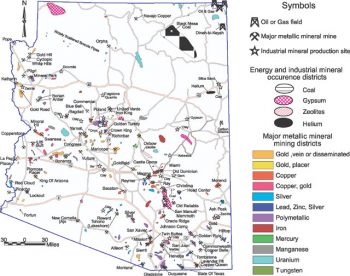 The rise of Arizona gold mines started in 1774, and the state has produced 17 million troy ounces (498 tons) of gold so far. The last big gold mine to operate in Arizona was Gold Road located at Oatman, which ceased operation in 1998. However, explorations are still active today and gold still can be found as a byproduct of copper mining. In 2006, all gold production in Arizona came as a byproduct of copper mining.

Despite the absence of large-scale gold exploration, there are still many places where some smaller Arizona gold mines and placers can yield decent yields:

Gold has been found all across the state of Arizona, but most of it is a byproduct of copper mining. While there are no big commercial-scale Arizona gold mines today, some believe that placers are still waiting to be found. It’s best to buy an Arizona gold claims map to boost your chances as the location of gold claims usually gets you closest to the gold. And also remember the biggest challenge with prospecting in Arizona is the lack of water, so metal detectors are a good piece of equipment to use here in the state. If you are an adventurous person don’t forget to carry one while you are out prospecting. Even if you don’t find gold during your outdoor adventure, at least you get to enjoy beauty of the desert and experience the excitement gold prospecting just like prospectors did decades ago.