The United States has produced a bewildering amount of gold through the last century. Unfortunately gold is not distributed in equal amount across the country. Some states are known for their extensive production, while others are not as prolific. The State of Washington falls under the latter category. There has never been an establishment of Washington gold mines at the same intense level as in other popular states such as California or Nevada, but it might be because no one has found large deposits yet in the state. 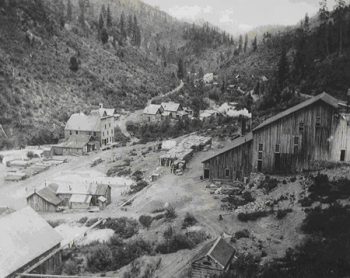 Washington State has quite ideal geographic characteristic for gold mining. The Columbia River runs from Canada and ends at Pacific Ocean. The river also drains all of the state’s water; in fact, it is the largest drainage in the Pacific Northwest. Such system allows for the existence of placer deposits throughout the gravels. However, the gold is most commonly in very fine form. The same thing applies to the Snake River which runs to Columbia in the southeast. You can consider the gold found in those waters leftover from other states. Traditional mining activities with panning may not be fruitful enough as it is too easy to lose gold in small sizes. This is probably the main reason why all the Washington gold mines never yielded large productions.

Total production so far is way lower compared to other states, but it does not change the fact that several millions of ounces have been found. For recreational prospectors, you probably will not come across a series of Washington gold mines with historical discoveries. Such places can still yield gold in other states, but you should not expect too much here. Metal detectors are not effective since the gold is distributed throughout creeks and rivers in very fine size. Best methods are traditional panning, sluice boxes, or suction dredging.

Gold prospecting regulations vary depending on areas. Some areas are private, managed by the federal government, or state-managed, so make sure you check with local agencies before you start panning those waters. A good gold claim map will keep you out of trouble. Washington Department of Fish and Game sets the regulations and there is a pamphlet that covers every related law you should know. Recreational gold prospecting and panning are far from illegal as long as you comply with those regulations.