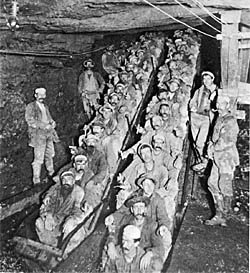 The first important gold discovery in South Dakota occurred in 1874 by a group of people led by General Custer. The area was later known as the Black Hills, and the news attracted quite a lot of people in search of fortunes despite the difficulties and challenges presented by the local Sioux Indians. Even after hundreds of years of initial discovery, Black Hills remain one of the most attractive South Dakota gold mines for modern day prospectors. It has been explored extensively ever since, but many believe that it still hides plenty of gold.

Compared to any other South Dakota gold mines, the Homestake Mine is undeniably the most lucrative. So far it has produced more than 40 million ounces of gold. It was first established in 1876 in Lead, and it had produced about 10% of the world’s gold supply for the next 125 years. A lot of prospectors actually tried to search for anything similar to Homestake Mine, but this was indeed one of a kind.

Homestake Mine had been active for centuries before it was closed in 2002. Throughout its active years, it has produced more than 40 million troy ounces (around 1.25 million kilograms) of gold. This particular mine is also popular in the scientific world for being the site where the solar neutrino problem was first discovered; today the phenomenon is known as The Homestake Experiment. In the 1960s, a deep underground laboratory was established in the area, and this was the first facility designed to observe the solar neutrinos.

In the neighboring towns of Lead, there are quite a lot of other South Dakota gold mines; for example Yellow Creek, Annie Creek, Squaw Creek, Deadwood Creek, Elk Creek, and Strawberry Creek. Gulches and lode gold mines were all explored. Both lode deposits and placer gold are potentially still there to be found. Today the only active gold mine in the state is Wharf Mine, also located in Lead. It is basically an open pit operation overseen by Coeur Mining. In 2016, the mine produced more than 100,000 ounces of gold.

Modern day prospectors should understand that many of the aforementioned creeks are not open mining areas. They are already claimed or located in private properties. Some good gold maps are advisable. Please make sure you carry the proper permits for gold prospecting or at least check with local authorities. Be prepared to explore new areas as you may not have any luck with the existing popular ones.