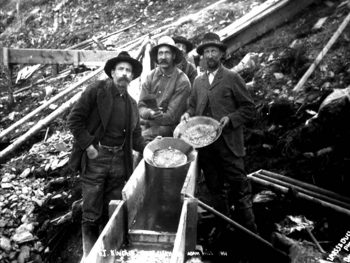 Shortly after the discovery of gold in the Sutter’s Mill in California (which started the California gold rush), another state also started its own lust-for-gold movement: Oregon. Reports of gold discovered in Oregon date back to 1850, but it was not quite enough to spark the Oregon gold rush. Two years later, however, the discovery of rich gold deposits by a group of sailors who headed for Crescent City did the job. The area where the deposit was found is now called Sailors Diggings. Prior to the first documented gold discovery in Southwestern Oregon, the region was pretty much uninhabited, with the exception of Native Americans, fur trappers, and gold prospectors travelling to Mother Lode Country.

In 1854, the Oregon gold rush was on its full-scale. A ditch that stretched about eleven miles long was constructed to deliver water to the rich-placer ground. Soon after that, large deposits were found in three different river drainages including the Rogue, Applegate, and Illinois Rivers. Althouse Creek was considered one of the richest; some said that it was prospected by more than 10,000 men during the first decade of the gold rush. Many of those men had been in the Northern California before they came to the creek; unfortunately for them, rich grounds had been already claimed by the time they arrived.

The drive for fortune seemed to know no bounds, and it took only a little while until prospectors realized that there were richer grounds in the area. Nearly every tributary for as long as 50 miles north of California border contained gold. The first period of the Oregon gold rush lasted until 1861, but it continued right away as soon as the discovery of gold in Eastern Oregon. The old mining towns in Southwest Oregon were abandoned, but you can still find them today.

Prospectors are still actively looking for the shiny precious yellow in the state. A few locations on public lands are used for recreational gold prospecting; these areas are not claimed, but they only allow recreational gold panning. Here are some of the best places to engage in outdoor activities and feel the Oregon Gold Rush once again:

Most areas only allow the use of traditional tools such as pans, while other may allow heavier machinery as long as you have the required permits for the equipment.